Not much sewing last week. Lots of cooking. We went to my niece's for Thanksgiving.  I think she thought she was going to feed an army instead of 20 people. There were 3 turkeys, 2 hams and a huge huge tray of mac and cheese plus so much more. She actually had to-go boxes so everyone could take leftovers home. I made a couple of appetizers to share last Wednesday, traveled and ate all day Thursday, spent Friday making soup stock and deboning turkey, then made a HUGE pot of turkey and wild rice soup on Saturday. Yum. I still have a ham bone to use up, I'll probably make a pot of beans tomorrow.

I did manage to get the green swirl quilt (my November UFO) loaded on the frame yesterday. 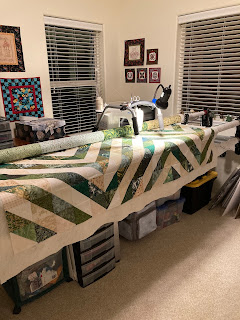 It is about 2/3's quilted. Probably could have finished it tonight but I currently have a very short attention span so about an hour of quilting was my limit.

I'll finish it tomorrow while the beans are cooking.

December's UFO is a cross stitch project I haven't touched for over a year. I think I'm going to not touch it longer and focus on finishing up my 2021 blackwork project and get a couple of donation quilt tops quilted.

I worked on a number of projects this past week and just enjoyed the sewing. 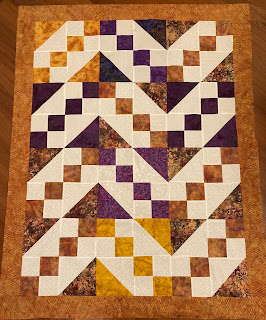 Put together a guild community services quilt top. The blocks were already made I just had to sew them together and add the border. 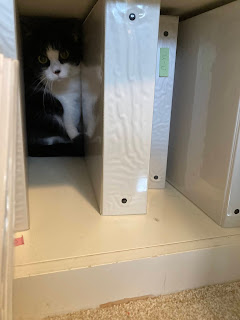 Bella (not) helping me find a quilt pattern. I can't open a cabinet, drawer or closet without her running to get inside it. 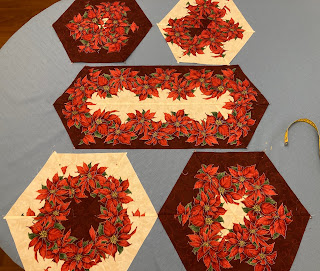 Table toppers using a Christmas border fabric and my 60 degree ruler. The upper right cream is kinda fugly, it's made from the last bit of pieces and parts. 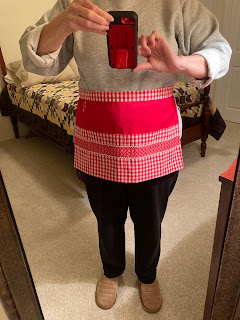 Me, modeling a utility apron I made for a friend. Dontcha love the sweats? It's been a dreary cold week (probably why I got so much sewing done), I don't think I've put on real clothes in a week. 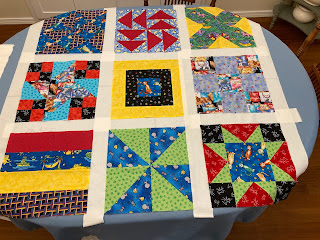 Finished the last three blocks of the FQS beginner sampler. This is not the final layout and I'll probably add a pieced border and cornerstones but this gives you an idea of what it will look like - BRIGHT! 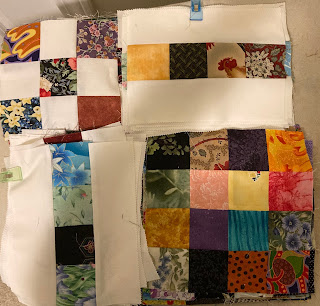 These are the blocks of my leader-ender project. I spent a day putting together the sashing rails. I think I'm going to really like this when it is finished. I'm still sewing 2.5 blocks together for the border.

Tomorrow I have to get dressed and go out in public...Costco, grocery store, post office, fun stuff to get ready for Thanksgiving at my niece's house. I hope you all have a safe and tasty Thanksgiving. 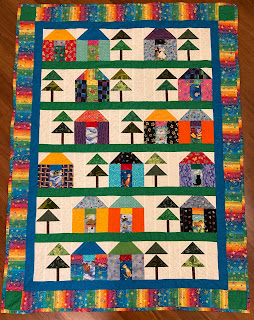 Hmmm, I don't know if it should be donated to a child, there are a LOT of swear words sewn into this quilt. The majority of the quilting (and swearing) was done with the walking foot. I think if I could learn how to ruler quilt things like this would go much faster. I don't know if there is anywhere around here that teaches ruler quilting on a domestic machine. 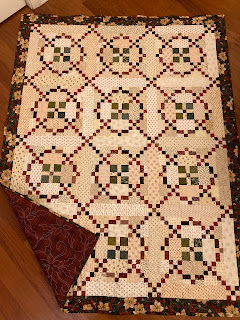 I finally got this quilt back from the longarm quilter...again. This time the quilting looks good. If you enlarge the picture you can clearly see the pantograph on the back of the quilt.

Now I feel like I can move on to something fun.

It was another quiet week with a few fun events. First my new car / SUV was delivered early so I got to pick it up on Tuesday. 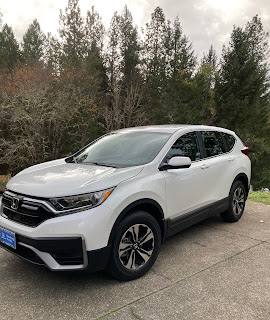 This thing almost drives itself! I'm having a very difficult time getting used to the keyless entry. I'm paranoid I'm going to lock the little fobby thingy (official technical name) in the vehicle. Or that the locks won't engage when I leave the vehicle. I can't test the lock by pulling on the handle like I used to because that unlocks everything. Yikes! It does drive really smooth. And with the crazy windy rainy weather we've been having I'm glad to have all wheel drive (it is currently pouring outside).

I had to drive to Roseburg to pick up the car. While I was there I went to a couple of the local quilt shops and picked up some coordinating fabrics to go with the Anna Maria Horner fabrics I recently purchased. Here is everything: 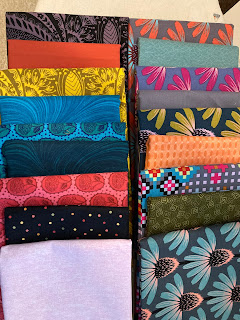 And this is the quilt I plan on making with them: 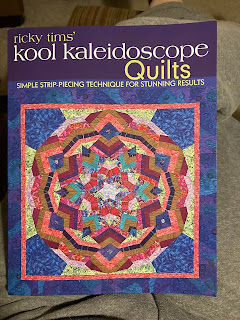 I'm really excited about making this quilt but probably won't start it until after the holiday's.  I want to finish up a few items first. 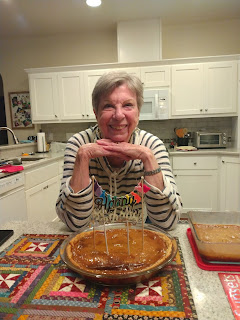 Yesterday my family celebrated my mom's birthday with dinner at my house. My niece made pumpkin pie for her "birthday cake". Yum! Her actual birthday is tomorrow. Happy Birthday Ma!

I've made slow progress on quilting the side-by-side quilt. All the in the ditch is done and the meandering in the background. I feel like I need to do "more" in the houses but I don't know what "more" would be. I'm going to add swirls in the border. Should I add anything else? 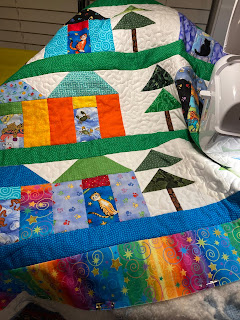 See the raggedy batting in the bottom right? The lovely Bella was at work again. That cat loves to chew on batting.

I forgot to mention my November UFO Challenge project last week. It is quilting the green swirl quilt that I traded out last April so I could quilt the Xmas table cloth. I made a scrappy back for the quilt using up a bunch of old green foliage fat quarters. I'll load it on the frame so it shouldn't take too long to get it quilted.

Not much has happened here. Still waiting on information about my Accord. It has only been two weeks but seems much longer.

I prepped these two Project Linus, Oliver in the Dog House, mystery blocks (don't you love the poo blocks!!). They are all ready for appliqueing. 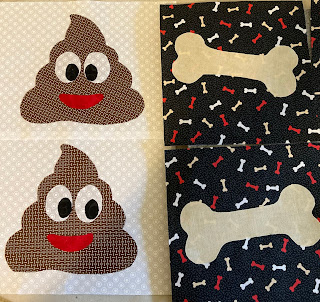 I'm over two weeks behind...mostly due to this Project Linus Side-by-Side Covid quilt: 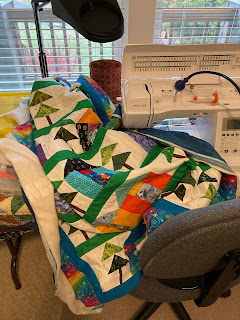 I just cannot get into quilting this quilt. And I'm determined to finish it before I work on anything else.

I had a good excuse yesterday for not quilting. I got to baby sit these two cuties. 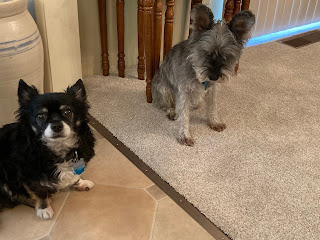 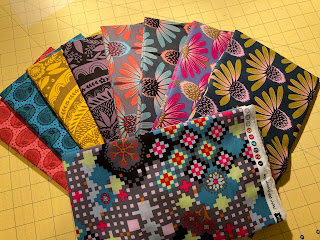 The fabrics are made by Free Spirit and designed by Anna Maria Horner. The line is called Love Always. I have doodled over the fabric line since its release. The colors in these fabrics are almost iridescent. I know what I want to make with them but need 3-4 more coordinating fabrics. Preferably solids. That may be a challenge as the colors are very unique.

Okay...I want to finish my current mystery blocks, start the new clues, and start a new project, so I better stop procrastinating and get busy quilting the Side-by-Side quilt.

I haven't had much time for sewing this week. Just a couple of little thing each night. 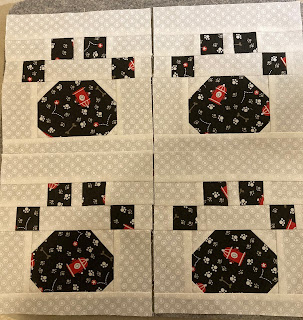 Project Linus Mystery clue #3. I'm behind three clues, two are really easy so hopefully I'll get caught up this week. 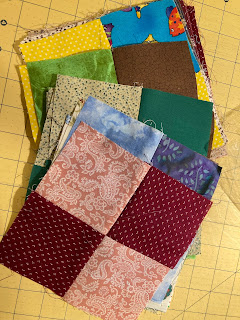 Some four-patch blocks for the guild community service quilts. 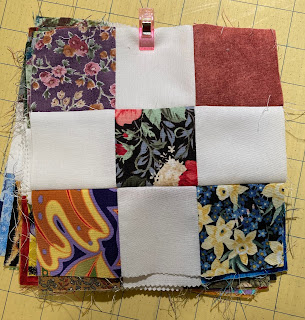 Nine-patch blocks for my leader-ender project. I've been making lots of progress on it.

I also bought a new car. I am a girl who loves loves loves a good deal...that didn't happen. There is a shortage of computer chips which has caused a shortage of cars, which is creating a high demand for new (and used) cars. Car sellers are happy campers. Car buyers are happy if they don't have to pay more than MSRP - how sad is that. 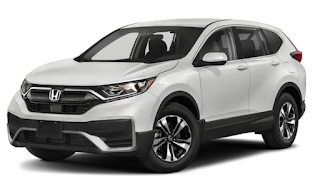 This is an internet picture but my new SUV should look very similar to it. Unfortunately it will not be delivered to the dealership until mid November.

I bought new fabric to console myself.

A week ago Tuesday I drove to California to visit friends and to attend the Pacific International Quilt Festival. I was supposed to return home last Sunday. Unfortunately Sunday when I went to start my car it made the most horrible noise ever...someone had stole the catalytic converter. In doing so they damaged the whole exhaust system. The cost to repair the car would have been over $6,000 (!!), most parts are on back order so even if the decision was to repair the car it would have been a month or more before it could be repaired. My car was a 2005 Honda Accord with over 180k miles in excellent condition but not worth $6k so the insurance company is totaling the car. 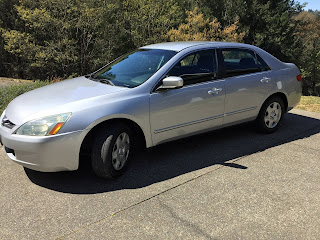 Boo hoo 😢. This has been the best car ever and I had really hoped to drive it for another 100k miles. After waiting three days on the insurance company I was able to get a rental car today and drove home today. Luckily I have the truck to drive until I can find another car...although apparently there is also a shortage of cars!

I was staying with my friend Angela. She and her family were so incredibly nice to put up with me for an additional three days.

While in California, Angela and I joined Stephanie and her sister at PIQF. The show was much smaller than previous years and not surprising, not very crowded. There were lots of pretty quilts but I only took pictures of two because I liked the quilting. I got to test drive a Handi Quilter Moxie long arm machine and fell in love. I bought some machine oil and a spool holder for my featherweight and that was it. It was nice to spend time with friends but the show was a little disappointing.

Angela and I both worked on our FQS Sampler quilts. 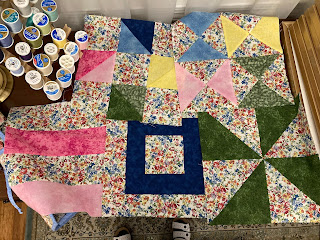 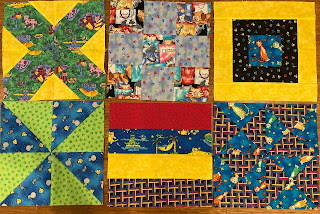 We both made microwave bowl holders. 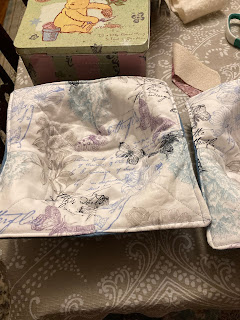 Mine - using Angela's fabric - which I made for her. She made one for her sister but I forgot to take a picture of it. 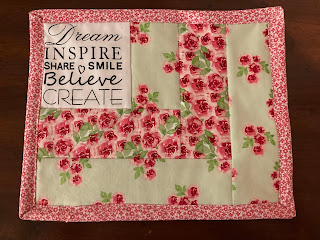 Angela also made a cute mug rug for her sister - this is officially her first finished quilt. I think she did a great job. 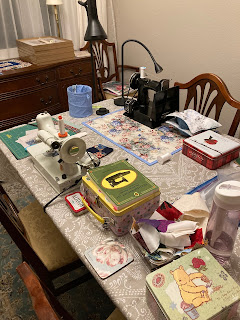 Here is the reveal of my secret sewing. A pop-up thread catcher, sewing machine mat and a matching (not pictured) ironing pad for Angela. Don't you love the two featherweights 💖.

I also gave Christina her quilt which she loved.

So a fun, productive, stressful, and sad week.