But my friend Angela did.

I took a road trip last week to the San Francisco bay area to visit Angela and Stephanie. I had a great time!

Angela loves crafts and recently learned how to knit (I've tried to get her into quilting with no luck😄).  She wanted to make a tote bag for her knitting from fabric that she's had for years. Sew with a little bit of fussy cutting, and a whole lot of make-it-up-as-we-go (no pattern), this is what she made. 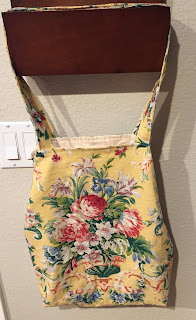 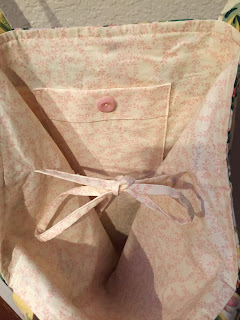 Her daughter really liked the tote and wanted one also...but no pocket...or inside ties...or lining. She wanted a reusable grocery bag. 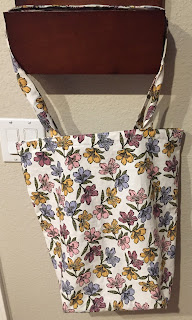 Another make it up as we went. I think both of them turned out great. Angela as already bought fabric for two more.

Angela has a vintage quilt that belonged to her mom. It is hand pieced and quilted similar to a crazy quilt. 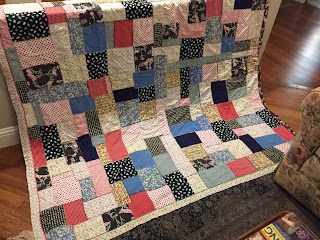 All of the pieces are turned under, based with a white thread, then "quilted" with a feather stitch. 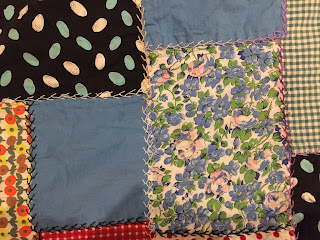 I think it is a "summer quilt" as there is no batting. Just the front and back. 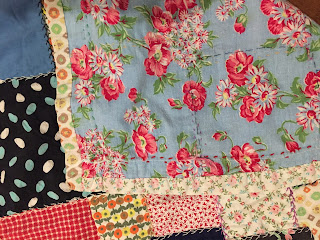 I've never seen anything like this before and just love it.

Stephanie and I meet up and went to the Vacaville Outlets. Lots of shopping but not much buying. We also found that the Cloth Carousal which used to be in Winters had moved to Vacaville. Their new location is great. Large with lots of light. I was low on solid black and they had a remnant at a good price. I know, boring purchase. 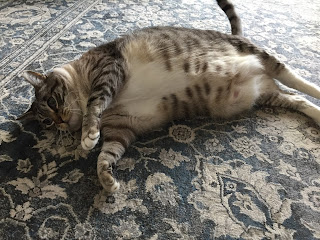 I also got to meet and spend time with Roy. He is such a sweet boy and reminded me so much of Fred. 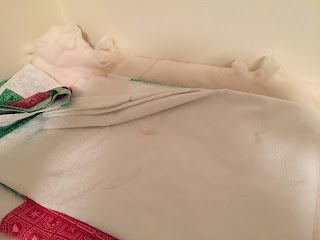 Then I came home to my demon cat who destroyed the batting for the Xmas table cloth quilt. Grrrrrr.

Posted by Joyful Quilter at 9:23 PM

Oh, this is such a fun post to read...the quilt is so interesting. I see a couple fabrics I wish I had!