It has been an interesting and fun week. A long time friend, Donna from Boise Idaho, came to visit me for a week. We haven't seen each other for years. I don't think we stopped talking the whole week.
The interesting (and sad) part were all the fires around me. Donna found a quilt shop on her drive in not far from me that was going out of business and was having a great sale. We tried to go there the day after she arrived. After driving 3/4 of the way there we turned around because we could see dense smoke, lots of water tank trunks and the edge of the South Obenchain fire. I decided to take back roads back home to just see some of the pretty Oregon terrain. It was a good thing I did or we would have been caught up in a fire in Central Point.
The next day my brother called to say his mobile home was burned down in the Almeda Drive fire in south Medford, Phoenix and Talent. He is now staying at my mom's house.
I had hoped we could take an overnight trip to Sisters, but there was a fire along highway 242 and the road was closed. We did go fabric shopping in Roseburg.
The air quality has been and still is very bad. This is not fog, it is smoke. The news said at one point visibility was less than 1/2 mile. 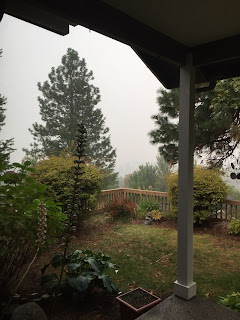 For a while we weren't sure if Donna was going to be able to drive home today as planned. Every road east had closures due to fires. She would have to either go 300 miles out of her way north to Portland, or almost 300 miles south into California. Luckily the temperatures and wind died down a couple of days ago most of the fires are partially contained and some roads have reopened. Donna did have to go home via Klamath Falls which wasn't too far out of her way.
The fun part: we went shopping, sewed, learned new things quilty wise, and talked more. It was wonderful reconnecting.
Donna and I started quilting around the same time - I think I was the bad influence and she was a willing victim. Donna brought me a couple of fun cat projects / fabric. I gave her the purple Pam Buda bundle I recently won - I'm just not a purple fan and she loves it. 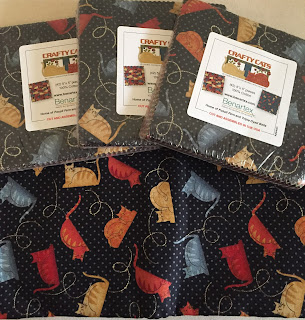 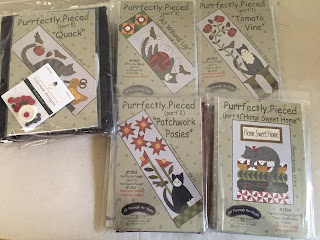 I was again a bad influence and got her interested in Civil War / 1800's reproduction fabrics while she was here. We both did some serious fabric shopping.
We also went to a lot of thrift/antique/junk shops around Grants Pass. I found the prefect piece of furniture for my entry way. Donna found a ladder to hang quilts (no picture). 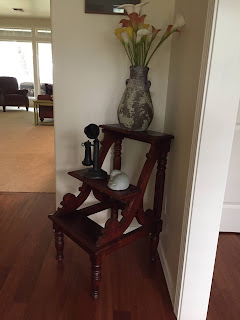 We also got a lot of sewing done...well, Donna got some sewing done. I totally forgot to take a picture of one of the projects she brought with her but she also fell in love with a Maple Island BQ3 quilt I made years ago, bought fabric while she was here, and made her own in one day. 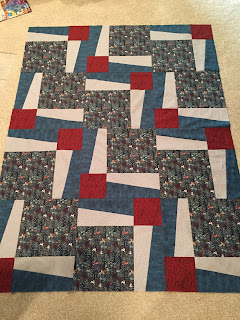 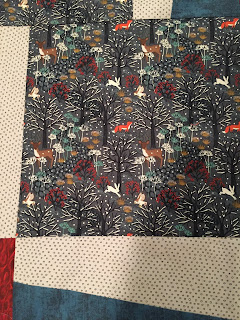 Next year it will be my turn to visit her. Can't wait!
Posted by Joyful Quilter at 9:52 PM

You’ll have a great time in Boise. It’s a lovely town. It looks like you both made the best of the fire situation. They have been terrible. We’ve had the nasty smoke here too. All in all, the visit is what really matters and I’m sure you both loved the time together.

That is scary about the fire, and being caught in it. Sounds like you had such a fun week/1 I am living the cat fabric and the other fabric as well and the quilt. And nice piece to set in your entryway!

I was wondering how you were effected by the fires. I didn't realize there were some so close to you. We've been looking at these scary, smokey skies for over two weeks. I can't imagine how firefighters are making it through all of this. My heart and gratitude goes out to them.
So glad your friend was able to visit and make it home again. It sounds like a wonderful visit despite the challenges.

I've been thinking about you and the Oregon fires. Glad they didn't get too near you. So happy that you had a friend come to visit. Our air quality where we live is not as bad as yours, however it was almost that in places when we went to Bakersfield.
Be safe.
xx, Carol